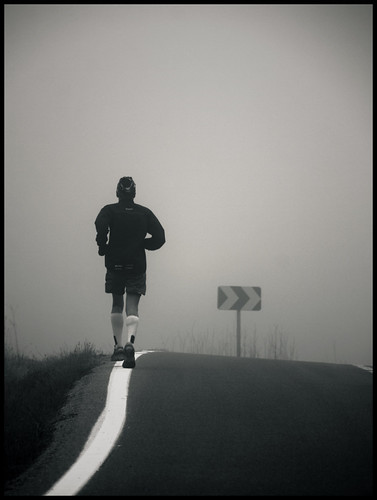 I often like to run through the neighborhoods around my house and try to get out several times a week. Well, “run” may be a strong word but it sounds better than “jog” or “who-are-you-kidding-it’s-a-fast-walk-at-best” so I’m sticking with it. Anyway, there is a long, steep hill early in my route. Naturally, I go slower up the hill. My stride shortens, it takes more effort, I breathe harder and faster, it hurts more. Naturally.

A person simply goes slower uphill and faster downhill. That’s just intuitive. But… That’s not how it worked. I discovered my pace slowed going up the hill and then stayed slow even when the road leveled and started going downhill. I would get used to running with a shorter stride and slower pace to compensate for the hill and then just keep that stride and pace even though it was considerably different than how I was running before the hill. The weird thing is that I would have never known it without looking at my watch – I would have sworn I was working hard and running at a great pace.

I’ve learned that I need to deliberately readjust my pace when I get to the top of the hill. It’s easy to do, but I have to make a conscious effort.

It made me wonder how often this happens at work. How often do we have to slow pace for a very legitimate reason but then don’t pick it back up once that reason has passed? How often do we start people out slowly because they are learning the job but then don’t ratchet the pace up as they gain skill? How often do we slow down and relax right after a big project and then slowed pace stays slow? From my experience, everyone believes they are a hard worker and may feel like they’re still putting in a great effort even when the road has turned downhill.

What’s the best work pace? Don’t know. Depends on the people and the situation. But I suspect that, like I discovered on my run, we get used to a pace and stay with it. We don’t naturally and intuitively adjust pace to the situation – we don’t automatically go faster just because it gets easier. I wonder if we don’t need to consciously and deliberately readjust each time the situation changes.